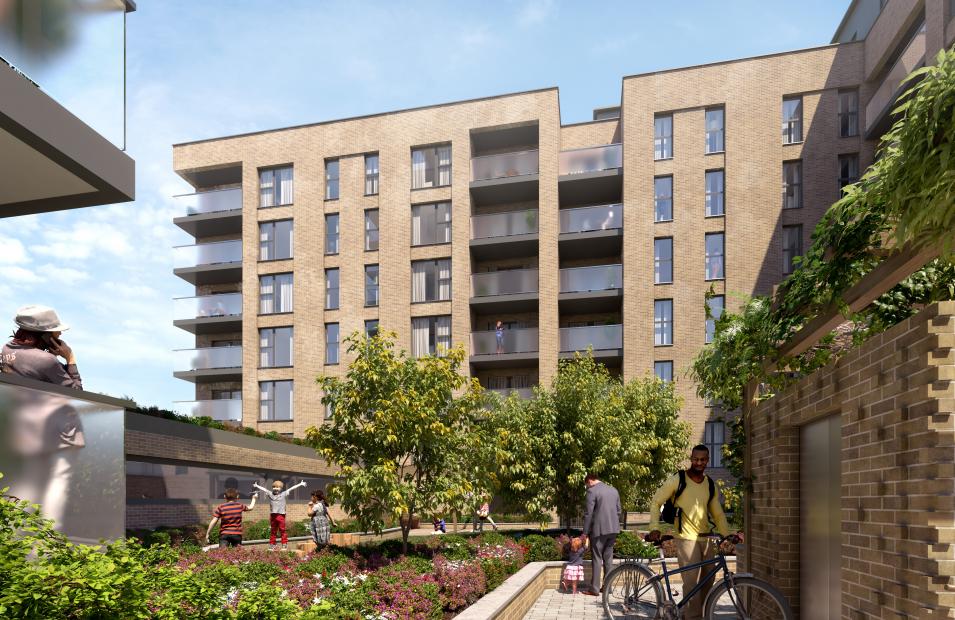 We are pleased to announce a new strategic joint venture partnership with Origin Housing, a leading housing association managing over 6,500 homes in London and Hertfordshire. The development will deliver 204 new homes to Harrow.

The £70 million development is the second to be announced as part of the joint venture partnership, and involves the redevelopment of the former Cumberland Hotel and existing Victoria Hall in the centre of Harrow. The scheme is part funded by the Greater London Authority (GLA), which has committed £25 million from the Mayor of London’s £600 million Housing Zones initiative.

The former brownfield site will bring a variety of new homes in addition to flexible retail space, community facilities, landscaped communal spaces, a children’s play area and a new pedestrian link between Sheepcote Road and St John’s Road. The new development will include 123 one and two bedroom apartments for private sale, alongside 54 shared ownership and 27 affordable rent tenures which will be managed by Origin.

The development is part of Harrow Council’s £1.7bn ‘Heart of Harrow’ regeneration drive for the area, which aims to transform the town centre and deliver 5,000 new homes. As part of our joint venture proposals, a new 6,000 sq ft community facility will be provided for the trustees of Victoria Hall, which will complement the adjacent St John the Baptist Church.

We are delighted to be working with Origin to deliver our second joint venture project together in Harrow and are thrilled to have secured funding from the Greater London Authority. We are proud to specialise in delivering joint venture and regeneration projects and our expertise in developing underutilised land can be a real asset to those organisations who need help in releasing more value to their local communities.

Origin is excited to be providing much needed new homes, in partnership with Hill, as part of our continuing commitment to the regeneration of Harrow town centre. The scheme contains 40% affordable homes, which will make a significant contribution to housing need in the borough and replaces a popular community facility.

The project builds on the success of Hill and Origin’s joint venture development Echo 1, which commenced in the summer of 2017, where we are delivering a further 116 new homes.

Construction of the Cumberland Hotel development is due to begin in the summer of 2018, with sales expected to launch in 2019.