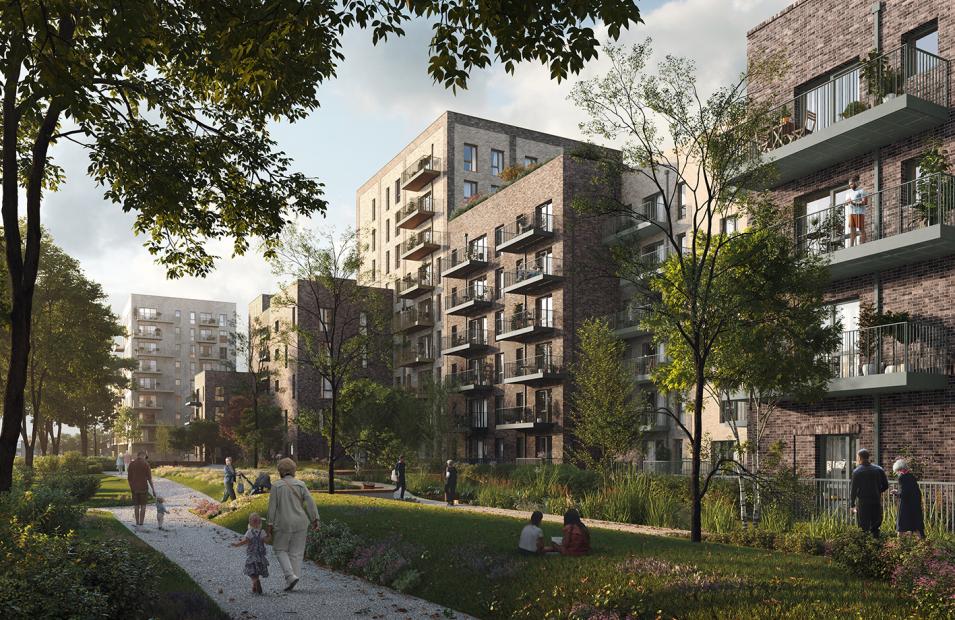 We are proud to announce we have formed a partnership with leading housing provider Home Group to deliver the regeneration of the Douglas Bader Park estate in Colindale, in the London borough of Barnet. The new joint venture partnership, Home Hill LLP, will transform the 1970s estate to create over 750 new homes, while ensuring all existing customers benefit from a new, high-quality home.

Douglas Bader Park is a Home Group estate currently comprising 271 existing homes that are in need of upgrading. A ballot carried in 2019 under the Mayor’s mandate that residents vote on estate renewal, found over 75% of residents were in favour of regeneration, on a turnout of 90%.

The proposed masterplan for the estate designed by architects Levitt Bernstein will replace the existing housing with 272 affordable new homes and 481 homes available for private sale, in a mix of tenure blind apartment blocks, maisonettes and houses. All existing residents have been given the option to be rehoused on the estate, with properties ranging in size up to six bedrooms to meet their needs. A detailed planning application was submitted to Barnet Council in December 2020 and construction is planned in three phases that will take approximately ten years to complete.

The Douglas Bader Park estate was built in the 1970s using ‘no-fines’ concrete, which was later found to have poor structural soundness. A full assessment by Home Group in 2016 found the homes fell short of expected standards and that a comprehensive regeneration of the entire estate would be the best long-term approach. Following the resident ballot in favour of regeneration, Home Group and Hill have continued to consult with residents as the plans have been developed, with online engagement taking place over the past year during COVID-19 restrictions.

The proposed development creates a vibrant and leafy new neighbourhood providing improved permeability with footpaths and landscaping including a central square. The wider network of open green space adjacent to the newly transformed estate will be significantly improved and landscaped. The affordable homes include houses, maisonettes and apartments and the properties for private sale will be one and two-bedroom apartments in a series of buildings up to nine floors high. A mixture of car parking including basement, podium and off-street parking is included in the plans, so that cars do not dominate the surrounding area.

We are extremely pleased to exchange contracts on this joint venture with Home Group through which we will significantly improve the quality of homes and their surroundings for existing Douglas Bader Park residents. The needs and aspirations of current and future residents remain central to our approach, boosted by our extensive experience in delivering successful community-led regeneration

We were delighted with the response by our customers who were overwhelmingly in favour of the regeneration of Douglas Bader Park.  We consulted extensively and listened carefully, and we will work closely with our customers and continue to listen to them throughout the lifetime of the development. And in doing so, I know that we and our partners Hill, will provide an estate fit for purpose and one in which the community can take pride.